AFCEN codes are used as reference for nuclear components in over 110 power plants currently in operation, under construction or in planning stages around the world.

The table hereafter summarizes how the different AFCEN codes are used around the world during the planning, design, construction and operation of the concerned reactors. 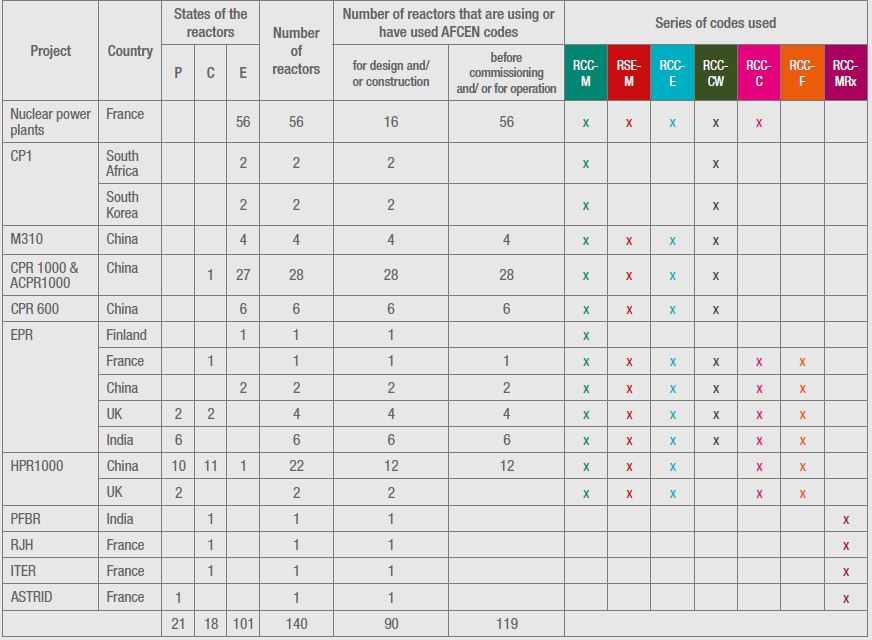 In addition to these formal applications of the codes and given their reputation, AFCEN codes have also served in France for designing many other nuclear research facilities and equipment, despite not being official standards.

The construction of nuclear marine propulsion equipment, (generally concerning the key equipment for the main primary and secondary systems), which is the responsability of Naval Group, is based on a specific technical standard that refers to the RCC-M code for design.

Standardization and fabrication conforming to internal rules, which are technically highly similar to those of the RCC-M code. This specific organization is related to the history of nuclear propulsion: this industry’s expertise was long ago documented as a series of instructions and procedures, which have gradually been improved through feedback and external standardization. In particular, when the RCC-M code was published, the DCNS Group endeavored to bring its own rules into alignment with the code, and ensure overall consistency in terms of the design and fabrication process, while maintaining the specific features of marine propulsion equipment (dimensions, accessibility and dismantling difficulties, stress resistance requirements for equipment in military-type applications, radiation protection requirements due to the crew’s constant proximity, etc.).